skip to main | skip to sidebar
EDITING I have made a Powerpoint presentation of this information, please email me at jbernard@comedysportztc.com, I'd be happy to send you a copy.

Editing is a very cool way of getting from one scene to another without having a blackout. It only works and is clear to the audience if everyone is decisive and knows what's happening.

Some people just clap (CLAP EDIT) or run in front to 'sweep' the stage (SWEEP EDIT) to edit between scenes.

Some people do a TRANSFORMER EDIT where everyone on the outside of the scene copies something physical/vocal that happened and transition it into the next scene, i.e.
BOB: I like tuna!
TRACY: Well! (she throws her arms up in the air)
--> Everyone else starts throwing their arms up in the air and saying "Well!" and they take over the whole stage. Eventually that becomes something else in a mirror-exercise kind of way. It might transform a couple of times. Then someone turns that into a new scene and everyone else clears the stage.

Some people do a MOVIE EDIT where they come onstage and use their hands like the viewfinder of a camera and they say, "We leave this store and pan over to a parking garage. It's late at night and it's cold and water is dripping from the roof. There is only one car here" or something like that. They're describing how the transition would happen in a movie, so it can be anything. Then other people start the scene in that new location.

Here are five more edits that *could* happen, just so that *when* they happen, you know what they are.

Please allow Buffy the Vampire Slayer, Fonzie, and a small monkey to show you. 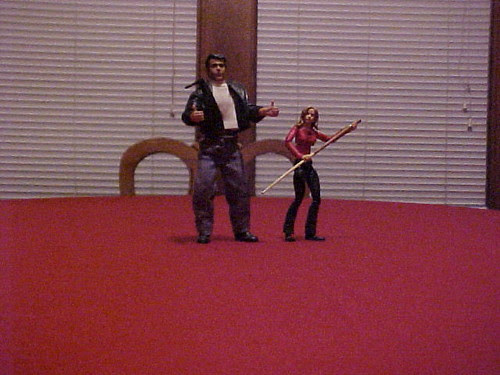 #1 - Fonzie and Buffy do their scene and find some reason to simply.... 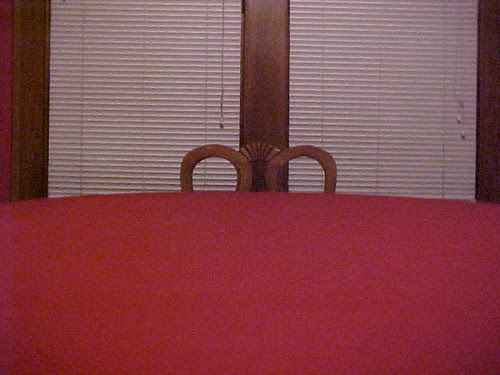 This edit is under-rated. We feel like we're trapped onstage, but if another scene needs to happen, just leave. 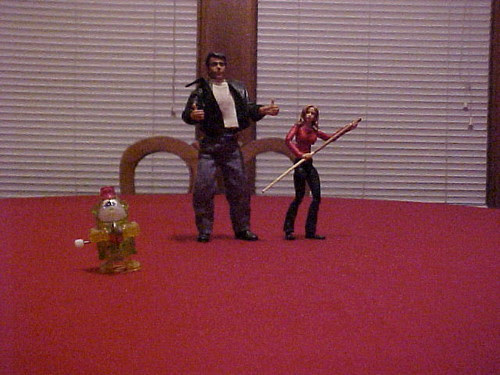 #1 - Fonzie and Buffy are doing a scene. Monkey enters downstage and begins something unrelated without making eye contact with them. He probably should start talking too. He can even start talking to someone who's not there and Fonzie or Buffy will step into that space to be that character. Oooh! Neat-o! 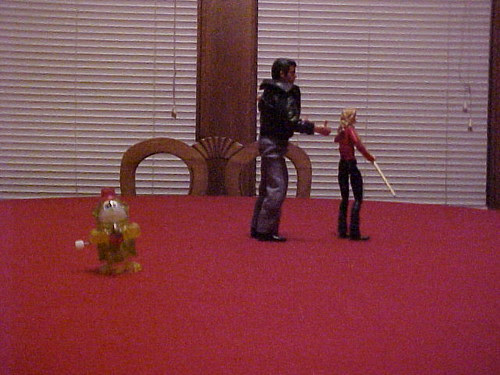 #2 - Buffy and Fonzie leave, either in character, finishing up what they're doing and fading away, or by going neutral and getting out of there.

This edit is very brave, and relies on the people in the scene to understand that the person is not joining them, but editing them. More on that distinction later. 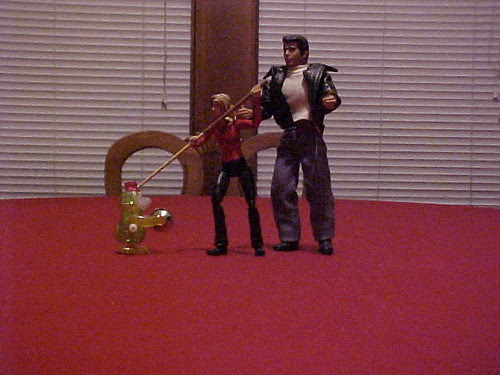 #1 - Monkey and Buffy are doing a scene. Fonzie tags Buffy on the shoulder. 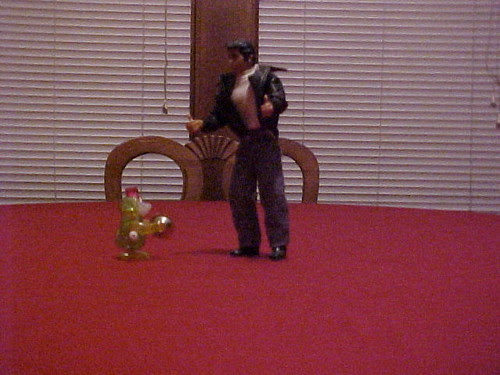 #2 - Buffy gets out of there, Monkey stays the same character and has a scene with Fonzie. Probably Buffy will tag back in, and this scene will have been a memory:
MONKEY: It's bad.
BUFFY: What did the doctor say?
FONZIE: (tags out Buffy) It's bird flu.
MONKEY: Oh no, doctor.
BUFFY: (tags out Fonzie, bringing us back to the present) Wow, that's awful. 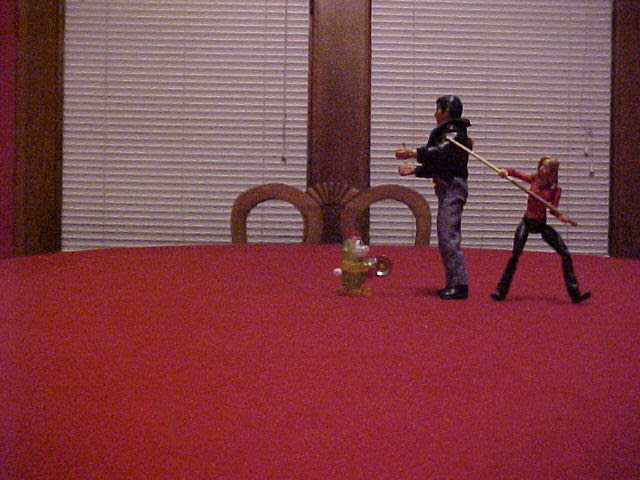 #3 - See, Buffy can tag back in. She probably shouldn't use a wooden stake to do so.

This can also be used to create a montage. Like a string of people can tag in so we see a series of short scenes where Monkey's interviewing for jobs or having bad dates or being mean to the elderly. Or something. 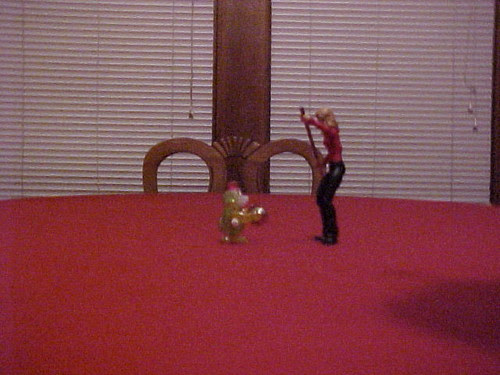 #1 Monkey and Buffy are having a scene. 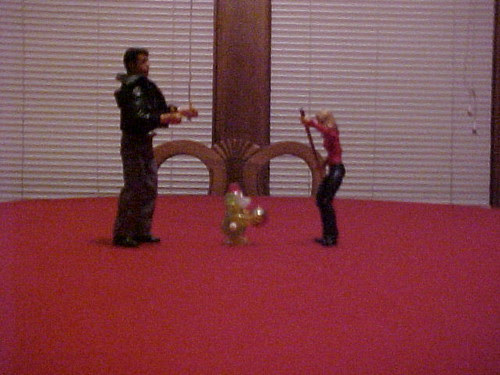 #2 - Fonzie enters very crisply and unmistakably, exactly behind Monkey and starts a scene interacting with him. 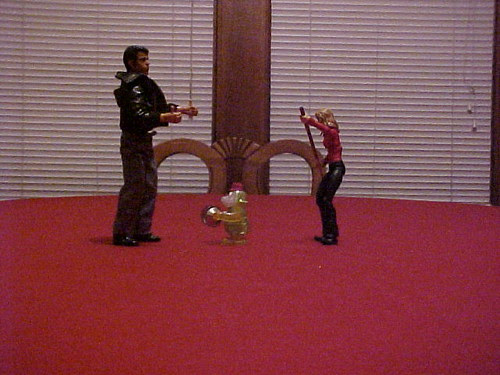 #3 - Monkey is the same character and has a scene with Fonzie. He becomes a pivot point. When he turns back to Buffy, they have a scene as their original characters:

This edit is really easy to misinterpret. It requires a lot of courage on the part of whoever's in Buffy's position, because you just have to freeze -- or continue the scene silently -- or clear off the stage ready to bolt back in, all depending on your team's style or needs. It requires smarts on the part of the pivot, because they have to understand what's going on and swing back to the first scene in a timely fashion. And it requires heart on the part of the person who initiates the swinging door by stepping in there....no it doesn't, I just wanted to finish my Wizard of Oz analogy. 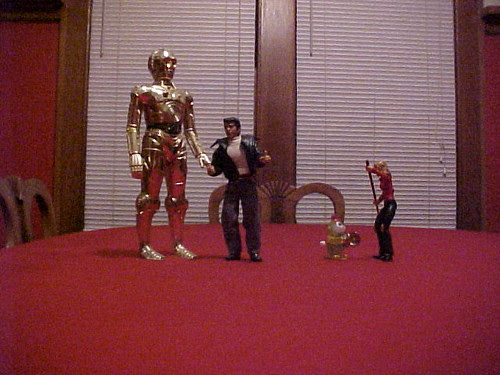 C-3PO and Fonzie are having a scene. Monkey and Buffy are having a different scene in a different place happening at the same time. Think "Summer Lovin'" from Grease where we get to see what the boys are up to and what the girls are up to simultaneously through the miracle of give and take. 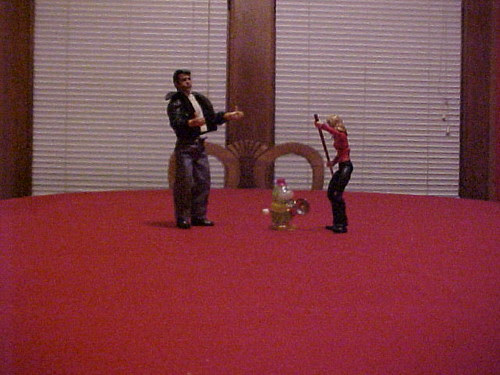 Fonzie is joining this scene. You can tell because he is engaging Monkey and Buffy and he's not downstage of them. 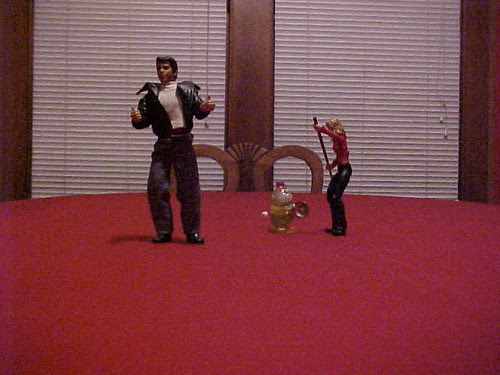 Fonzie is editing this scene. Note he is not making eye contact with Monkey or Buffy and is doing something completely unrelated.

Edits don't work when you tell us with your eyes and body language that you have no idea what's going on and that the person doing the edit is an idiot. Edits work when you make a clear decision. If you're being cross-faded, your job is to make it look like a director told you to back off stage like a fog, or to finish what you were doing and turn and leave, or whatever it is you choose to do to get out. If you're tagged, get offstage and be ready to tag back in. If someone is talking to your scene partner and ignoring you, decide it's a swinging door - just be patient.

We can define the space on our stage any way we want to. Don't limit yourself to realism and linear story-telling.

Thanks to Brian Kelly for providing the models and dining room table for this photo-essay.